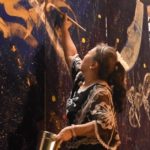 Yuko Sagisaka was born in 1961 in Fuji, Shizuoka. At the age of 5, she was inspired by the warmth portrayed by the Madonna and Child artwork by Raphael, which was displayed at her Seibo Kindergarten School. She studied under Takeyama Murai and graduated from the Junior College Department of Life Art Course at Tokai University. The theme of her artworks is “unconditional love,” which describes the world connected through love. Using a board as support, she uses the techniques, “Classical Tempera Technique with a Gold Background,” which was an art technique commonly used during the late Medieval Ages and the Renaissance Period, and “Oil painting and Tempera Technique,” which was commonly used during the Northern Renaissance Period. In 2000, the artwork she gifted at the Monaco-Japan Festival was included in the Monaco royal collection. After that, she was invited to festivals and art fairs in Edinburgh and other countries around the world. She was valued for her authentic classical techniques, poetic lyricism, and graceful colors, and has been referred to as the return of Botticelli at her Milano solo exhibition. In 2007, she presented her Pope Benedict XVI artwork. Awards: Gold prize at an art competition in Australia; Award of Excellence at the Japan-China Friendship Art International Painting Art Exhibition and so on. Solo Exhibition: Milano, Shanghai, Tokyo Metropolitan Teien Art Museum, and so on.

Donated works to the Pope and the Monaco royal family

Tempera workshop is being held！

Tempera workshop is being held！…

Exhibition introduction from all over the world

Exhibition introduction from all over the world…

Work purchase / orderIf you would like to purchase or order …